Zombie With a Shotgun

Zombie With a Shotgun

Time ago I received a request f

or a commission from a NY director: Hilton Ariel Ruiz. He asked for a pin-up to advertise his Zombie with a Shotgun Vimeo videos. I watched the videos posted on line and drew an Image from the first one because I couldn’t resist to draw a bearded man with an axe 🙂

Hilton liked the commission a lot and he proposed me to draw a comic book of the same character. I loved what he was doing so I accepted the work and I started to draw Zombie with a Shotgun issue 1!

Together with the decision of creating a comic book Hilton started to work on the ZWAS movie.

I created the comic book script from the Movie script, so I had total freedom and Hilton trusted me completely.

When I started to ink the pencils pages I realized that I needed an help to complete the work on time, so I hired an inker (Raffaele Semeraro) that inked 10 out of 20 pages of the comic. Along the way we run into a very good colorist that accepted to climb on board and color the book : Mark Dale, while I assigned lettering work to the same Team I worked with on the Italian Near Death version: Miriam and Massimo. 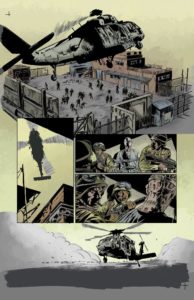 Working on that team has been really a blast! The comic was done…it was time to find it a home.

Hilton and I sent out several submission pitches and after a while we received a very good proposal from Rats and Crows Publishing.

So I’m very happy to announce that it’s official: Rats & Crows Publishing will be releasing Zombie with a Shotgun comic.
Comic will be released end of May 2017 together with the movie release!
please Pre-Order ur copy you can do I from this link

He’s a Zombie with a Shotgun…c’mon! Nuff Said!

Thanks in advance for your support!

No comments so far.